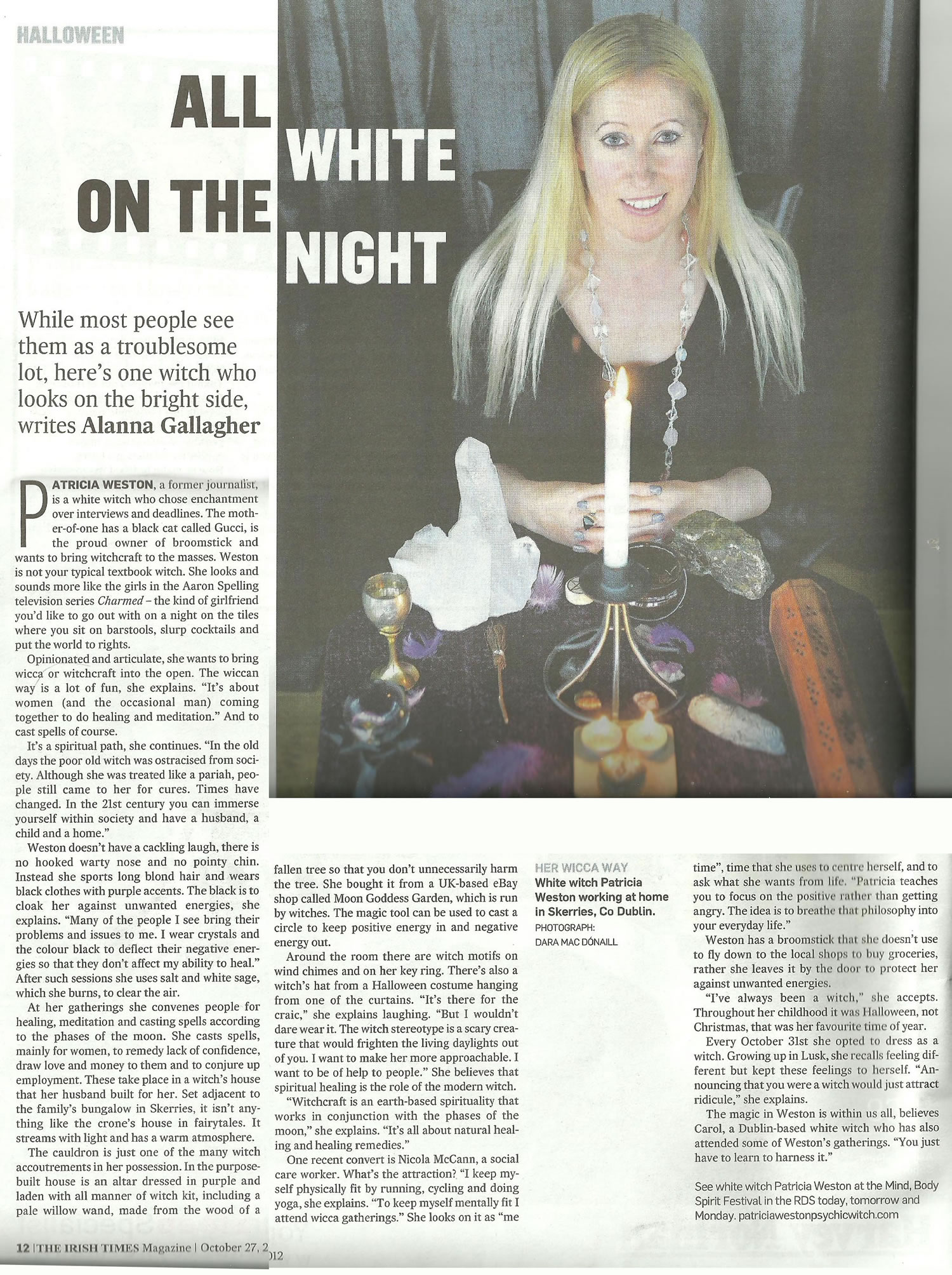 While most people see them as a troublesome lot, here’s one witch who looks on the bright side, writes ALANNA GALLAGHER

PATRICIA WESTON, a former journalist, is a white witch who chose enchantment over interviews and deadlines. The mother-of-one has a black cat called Gucci, is the proud owner of broomstick and wants to bring witchcraft to the masses. Weston is not your typical textbook witch. She looks and sounds more like the girls in the Aaron Spelling television series Charmed – the kind of girlfriend you’d like to go out with on a night on the tiles where you sit on barstools, slurp cocktails and put the world to rights.

Opinionated and articulate, she wants to bring wicca or witchcraft into the open. The wiccan way is a lot of fun, she explains. “It’s about women (and the occasional man) coming together to do healing and meditation.” And to cast spells of course.

It’s a spiritual path, she continues. “In the old days the poor old witch was ostracised from society. Although she was treated like a pariah, people still came to her for cures. Times have changed. In the 21st century you can immerse yourself within society and have a husband, a child and a home.”

Weston doesn’t have a cackling laugh, there is no hooked warty nose and no pointy chin. Instead she sports long blond hair and wears black clothes with purple accents. The black is to cloak her against unwanted energies, she explains. “Many of the people I see bring their problems and issues to me. I wear crystals and the colour black to deflect their negative energies so that they don’t affect my ability to heal.” After such sessions she uses salt and white sage, which she burns, to clear the air.

At her gatherings she convenes people for healing, meditation and casting spells according to the phases of the moon. She casts spells, mainly for women, to remedy lack of confidence, draw love and money to them and to conjure up employment. These take place in a witch’s house that her husband built for her. Set adjacent to the family’s bungalow in Skerries, it isn’t anything like the crone’s house in fairytales. It streams with light and has a warm atmosphere.

The cauldron is just one of the many witch accoutrements in her possession. In the purpose-built house is an altar dressed in purple and laden with all manner of witch kit, including a pale willow wand, made from the wood of a fallen tree so that you don’t unnecessarily harm the tree. She bought it from a UK-based eBay shop called Moon Goddess Garden, which is run by witches. The magic tool can be used to cast a circle to keep positive energy in and negative energy out.

Around the room there are witch motifs on wind chimes and on her key ring. There’s also a witch’s hat from a Halloween costume hanging from one of the curtains. “It’s there for the craic,” she explains laughing. “But I wouldn’t dare wear it. The witch stereotype is a scary creature that would frighten the living daylights out of you. I want to make her more approachable. I want to be of help to people.” She believes that spiritual healing is the role of the modern witch.

“Witchcraft is an earth-based spirituality that works in conjunction with the phases of the moon,” she explains. “It’s all about natural healing and healing remedies.”

One recent convert is Nicola McCann, a social care worker. What’s the attraction? “I keep myself physically fit by running, cycling and doing yoga, she explains. “To keep myself mentally fit I attend wicca gatherings.” She looks on it as “me time”, time that she uses to centre herself, and to ask what she wants from life. “Patricia teaches you to focus on the positive rather than getting angry. The idea is to breathe that philosophy into your everyday life.”

Weston has a broomstick that she doesn’t use to fly down to the local shops to buy groceries, rather she leaves it by the door to protect her against unwanted energies.

“I’ve always been a witch,” she accepts. Throughout her childhood it was Halloween, not Christmas, that was her favourite time of year.

Every October 31st she opted to dress as a witch. Growing up in Lusk, she recalls feeling different but kept these feelings to herself. “Announcing that you were a witch would just attract ridicule,” she explains.

The magic in Weston is within us all, believes Carol, a Dublin-based white witch who has also attended some of Weston’s gatherings. “You just have to learn to harness it.” 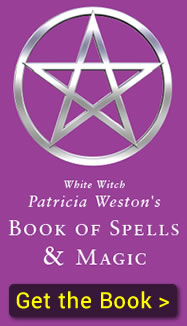